Language Marketplace has been providing professional translation services in Houston to a wide range of clients for many years. All of our professionals are "mother-tongue" translators and interpreters - no software can duplicate their quality of work. Our translators have a university degree and belong to professional translators' associations, where available - either in the USA or in-country of origin. Beyond any accreditation, at Language Marketplace, we only keep the best through an ongoing system of continual assessment, as every document is also proofread by our experienced senior proofreaders.

Houston is the fourth-largest city in the United States of America and the largest city within the state of Texas. As of the 2006 U.S. Census estimate, the city has a population of well over 2 million.

Houston's economy has a broad industrial base in the energy, manufacturing, aeronautics, and technology; only New York City is home to more Fortune 500 headquarters. Commercially, Houston is ranked as a world city, and the area is a leading center for building oilfield equipment. The Port of Houston ranks first in the United States in international waterborne tonnage handled and second in total cargo tonnage handled. The city has a multicultural population with a large and growing international community. It is home to many cultural institutions and exhibits—attracting more than 7 million visitors a year to the Houston Museum District. Houston has an active visual and performing arts scene in the Theater District and is one of five U.S. cities that offer year-round resident companies in all major performing arts. Four of the six super major energy companies maintain a large base of operations in Houston. The headquarters of Shell Oil Company, the US affiliate of Royal Dutch Shell, is located at One Shell Plaza. While ExxonMobil maintains its global headquarters in Irving, Texas, its upstream and chemical divisions are located in Houston. Chevron has offices in Houston, having acquired a 40 story building intended to be the headquarters of Enron. The company's Chevron Pipe Line Company subsidiary is headquartered in Houston. Lastly, the international headquarters of ConocoPhillips is also located in Houston. 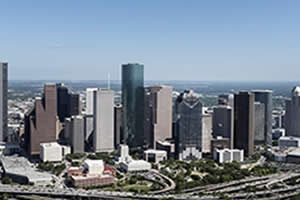