Arkansas is a state located in the southern region of the United States. Arkansas shares a border with six states, and its eastern border largely defined by the Mississippi River. Its diverse geography ranges from the mountainous regions of the Ozarks and the Ouachita Mountains, which make up the U.S. Interior Highlands, to the eastern lowlands along the Mississippi River. Arkansas is a land of mountains and valleys, thick forests and fertile plains. The state's agriculture outputs are poultry and eggs, soybeans, sorghum, cattle, cotton, rice, hogs, and milk. Its industrial outputs are food processing, electric equipment, fabricated metal products, machinery, paper products, bromine, and vanadium.
Arkansas generally has a humid subtropical climate, which borders on humid continental in some northern highland areas.

As of 2006, Arkansas has an estimated population of 2,810,000.
The capital and most populous city is Little Rock, located in the central portion of the state.
The Little Rock-North Little Rock-Pine Bluff Combined Statistical Area had 841,000 people in the 2007 census estimates and is the largest in Arkansas.
The Fayetteville-Springdale-Rogers metropolitan area is increasingly important to the state and its economy. The US Census estimated the population of the MSA to be 436,000 in 2007, up from 347,000 in 2000, making it one of the fastest growing in the nation.
Arkansas, like most other Southern states, is part of the Bible Belt and is predominantly Protestant.

Below is a list of Towns and Cities in Arkansas that language Marketplace presently has customers: 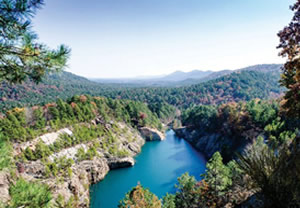 Arkansas has the only active diamond mine in the U.S.