Hawaii was admitted to the Union on August 21, 1959, making it the 50th state. Its capital is Honolulu on the island of Oahu. The most recent census estimate puts the state's population at 1,283,000. The climate of Hawaii is typical for a tropical area, although temperatures and humidity tend to be a bit less extreme than other tropical locales due to the constant trade winds blowing from the east. The State of Hawaii has two official languages recognized in its constitution adopted at the 1978 constitutional convention: English and Hawaiian. Hawaii Creole English (locally referred to as 'Pidgin') is the native dialect of many born-and-raised residents and is a second dialect for many other residents. After English, the second-, third- and fourth-most spoken individual languages are Tagalog (most are bilingual in Wikang Filipino), Japanese, and Ilokano respectively.

This state encompasses nearly the entire volcanic Hawaiian Island chain, which comprises hundreds of islands spread over 1,500 miles. At the southeastern end of the archipelago, the eight "main islands" are (from the northwest to southeast) Niihau, Kauai, Oahu, Molokai, Lanai, Kahoolawe, Maui, and Hawaii. The last is by far the largest, and is often called the "Big Island" or "Big Isle" to avoid confusion with the state as a whole. Hawaii is the only state of the United States that: is not geographically located in North America; grows coffee; is completely surrounded by water; is totally an archipelago; has a royal palace; and does not have a straight line in its state boundary.

We have English | Spanish | French language coordinator services. Below is a list of towns and cities in Hawaii that Language Marketplace presently has customers: 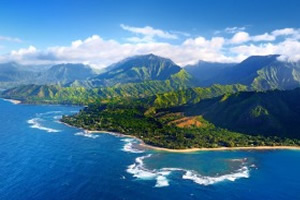 The only royal palace in the U.S. (Iolani), is located in Hawaii!

The largest companies with headquarters in the state are: