Residents of Indiana are known as Hoosiers. Although many stories are told, the origin of the term is unknown. With about 6 million residents, it is ranked 15th in population and is the smallest state west of the Appalachian Mountains. The largest city in Indiana is state capital Indianapolis. "Indy" and its surrounding suburban areas are home to over 2,000,000 people - almost a full third of the state's population. Fort Wayne, Evansville, and South Bend are the only other Indiana cities with populations over 100,000. Most of Indiana has a humid continental climate, with hot, humid summers and cool to cold winters. The extreme southern portions of the state border on a humid subtropical climate, with somewhat milder winters.

Indiana is a diverse state with a few large urban areas, a number of smaller industrial cities, and many small towns. It is known nationally for its sports teams and athletic events: the NFL's Indianapolis Colts, the NBA's Indiana Pacers, the Indianapolis 500 motorsports race, the largest single-day sporting event in the world, and for a strong basketball tradition, often called Hoosier Hysteria. A high percentage of Indiana's income is from manufacturing. The Calumet region of northwest Indiana is the largest steel producing area in the U.S. Steelmaking itself requires generating very large amounts of electric power. Indiana's other manufactures include pharmaceuticals and medical devices, automobiles, electrical equipment, transportation equipment, chemical products, rubber, petroleum and coal products, and factory machinery. Indiana's power production chiefly consists of the consumption of fossil fuels, mainly coal. Indiana has 24 coal power plants, including the largest coal power plant in the United States, Gibson Generating Station, located near Owensville, Indiana.

We have English | Spanish | French language coordinator services. Below is a list of towns and cities in Indiana that Language Marketplace presently has customers: 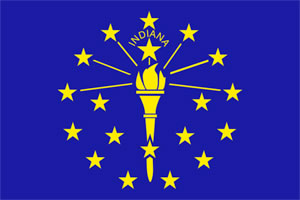 The most famous car race in the world: the Indy 500, is located in Indiana!

The largest companies with headquarters in
Indiana