As of 2008, Iowa has an estimated population of 3,002,000. Des Moines is the largest city in Iowa and the state's political, economic, and cultural center. Recent immigration from other states and countries has increased Iowa's population and diversity. Des Moines is Iowa's capital and largest city. Iowa, like most of the Midwest, has a humid continental climate throughout the state with extremes of both heat and cold.

Iowa is one of the safest states in which to live and its population is among the most literate and best-educated. Iowa takes pride in its education system. The graduation rate for high school seniors has gradually increased to 91% in 2006. The state has the third highest graduation rate in the nation. Iowa continually ranks in the top 3 for ACT and SAT scores. In 2008, Iowa ranked top in the nation for average SAT scores per student and second in the nation for average ACT scores per student.

While Iowa is often viewed as a farming state, (known as the "Food Capital of the World”) in reality agriculture is a small portion of a diversified economy, with manufacturing, biotechnology, finance and insurance services, and government services contributing substantially to Iowa's economy. This economic diversity has helped Iowa weather the current recession better than most states, with unemployment substantially lower than the rest of the nation. Manufacturing is the largest sector of Iowa's economy, with $21 billion (21%) of Iowa’s 2003 gross state product. Major manufacturing sectors include food processing, heavy machinery, and agricultural chemicals.

We have English | Spanish | French language coordinator services. Below is a list of towns and cities in Iowa that Language Marketplace presently has customers: 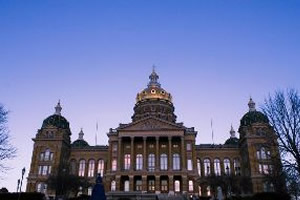 The shortest and steepest railroad in the U.S., Dubuque: 60° incline, 296 feet, is located in Iowa!

The largest companies with headquarters in
Iowa