As of 2008, Maine has an estimated population of 1,321,000. It is known for its scenery; its jagged, mostly rocky coastline; its low, rolling mountains; and its heavily forested interior — as well as for its seafood cuisine, especially lobsters and clams. The largest municipality in Maine, by population, is the city of Portland (pop. 64,000). Maine experiences a humid continental climate , with warm, humid summers. Winters are cold and snowy throughout the state, and are especially severe in the northern parts of Maine. Maine ports play a key role in national transportation. Beginning around 1880, Portland's rail link and ice-free port made it Canada's principal winter port, until the aggressive development of Halifax, Nova Scotia, in the mid-1900s. In 2001, Maine's largest city of Portland surpassed Boston as New England's busiest port (by tonnage), due to its ability to handle large tankers.

*Maine's agricultural outputs include poultry, eggs, dairy products, cattle, wild blueberries (the state produces 25% of all blueberries in North America, making it the largest blueberry producer in the world), apples, maple syrup and maple sugar. Aroostook County is known for its potato crops. Maine is the number one exporter of blueberries and toothpicks. The largest toothpick manufacturing plant in the United States is located in Strong, Maine. The Strong Wood Products Incorporated plant produces twenty million toothpicks a day. Maine also has a longstanding tradition of being home to many shipbuilding companies. In the 18th and 19th centuries, Maine was home to many shipyards that produced wooden sailing ships.

Language Marketplace has been providing professional Interpretation and Translation services in Maine to a wide range of clients for many years.

We have English | Spanish | French language coordinator and conference interpreter services. Below is a list of towns and cities in Maine that Language Marketplace presently has customers: 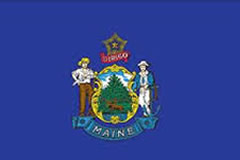 The most easterly point in the U.S., West Quoddy Head, is located in Maine!

The largest companies with headquarters in
Maine