New Jersey has the highest population density at 1,170 residents per square mile, and the second highest median income of any state in the United States. Estimated New Jersey's population is at 8,900,000. Summers are typically hot and humid, and winters are usually cold. Spring and Autumn are erratic, and could range from chilly to warm, although they are usually pleasantly mild with low humidity. Residents of New Jersey are most commonly referred to as "New Jerseyans" or "New Jerseyites."

New Jersey is one of the most ethnically and religiously diverse states in the country. It has the second largest Jewish population by percentage; the second largest Muslim population by percent; and the third highest Asian population by percent. Each county's largest ethnic group, according to the 2000 Census, is: Italian — Passaic, Bergen, Union, Hudson, Morris, Somerset, Middlesex, Mercer, Monmouth, Ocean, Atlantic, Cumberland Irish — Sussex, Burlington, Camden, Gloucester, Cape May German — Warren, Hunterdon, Salem. New Jersey is home to more scientists and engineers per square mile than anywhere else in the world. New Jersey's economy is centered on the pharmaceutical industry, chemical development, telecommunications, food processing, electric equipment, printing and publishing, and tourism. New Jersey has a strong scientific economy. New Jersey is home to major pharmaceutical firms such as Johnson and Johnson, , Pfizer, Merck, and Schering-Plough. New Jersey is home to major telecommunications firms such as Verizon Wireless, Alcatel-Lucent and AT&T Communications.

Language Marketplace has been providing professional Interpretation and Translation services in New Jersey to a wide range of clients for many years.

We have English | Spanish | French language coordinators and conference interpreter services. Below is a list of towns and cities in New Jersey that Language Marketplace presently has customers: 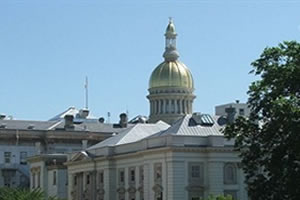 The world's first drive-in movie theater was built in 1933 near Camden, New Jersey!

The largest companies with headquarters in
New Jersey