New York was the third largest state in population after California and Texas, with an estimated population of about 20 million. New York City, which is geographically the largest city in the state and most populous in the United States, comprises five counties; the Bronx, New York (Manhattan), Queens, Kings Brooklyn), and Richmond (Staten Island). New York is home to both Columbia University and Cornell University, making it the only state to contain more than one Ivy League school.

Language Marketplace has been providing professional Interpretation and Translation services in New York to a wide range of clients for many years.

We have English | Spanish | French language coordinators and conference interpreter services. Below is a list of towns and cities in New York that Language Marketplace presently has customers: 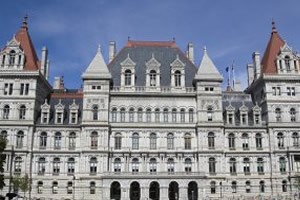 The first presidential inauguration of George Washington took the oath of office in New York City on April 30, 1789.

The largest companies with headquarters in New York