North Carolina is a state located on the Atlantic Seaboard in the southeastern United States. North Carolina has a wide range of elevations, from sea level on the coast to almost 6,700 feet in the mountains. The coastal plains are strongly influenced by the Atlantic Ocean. Most of the state falls in the humid subtropical zone. More than 300 miles from the coast, the western, mountainous part of the state has a subtropical highland climate. As of 2008, North Carolina is the fourth-fastest growing state in the United States and the fastest growing state east of the Mississippi River. The state is the 6th most visited in the country (after Florida, California, New York, Nevada and Pennsylvania).

There has been a distinct difference in the economic growth of North Carolina's urban and rural areas. While large cities have experienced rapid population and economic growth over the last thirty years, many of the state's small towns have suffered from loss of jobs and population. Most of North Carolina's small towns developed around textile and furniture factories. As these factories closed and moved to low-wage markets in Asia and Latin America, the small towns that depended upon them have suffered. Agriculture in the western counties of North Carolina is experiencing a renewal along with a shift to niche marketing, fueled by the growing demand for organic and local products.

Language Marketplace has been providing professional Interpretation and Translation services in North Carolina to a wide range of clients for many years.

We have English | Spanish | French language coordinators and conference interpreter services. Below is a list of towns and cities in North Carolina that Language Marketplace presently has customers: 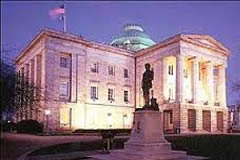 Virginia Dare, the first English child born in America on Roanoake Island, was in 1587!

The largest companies with headquarters in
North Carolina