North Dakota is a state located in the Midwestern region of the United States Of America, on the Canadian border. North Dakota is the 19th largest state in the US, yet it is the 3rd least populous, with just over 640,000 residents. The western half of the state is hilly and contains lignite coal and oil whereas the east holds fertile farmland. Agriculture has long dominated the economy and culture of North Dakota. North Dakota's earliest industries were fur trading and agriculture. The state is the largest producer in the U.S. of barely, sunflower seeds, spring and durum wheat for processing, and farm-raised turkeys.
North Dakota endures temperature extremes, with cold winters and hot summers: the record low temperature is -60 °F and the record high temperature is 121 °F . Depending on location, average annual precipitation ranges from 14 inch to 22 inch . Flooding in the spring is a relatively common event in the Red River Valley due to the river flowing north into Canada, creating ice jams. The most destructive flooding in eastern North Dakota occurred in 1997, until spring 2009 when another massive flood occurred causing extensive damage to communities surrounding Fargo.

Language Marketplace has been providing professional Interpretation and Translation services in North Dakota to a wide range of clients for many years.

We have English | Spanish | French language coordinators and conference interpreter services. Below is a list of towns and cities in North Dakota that Language Marketplace presently has customers: 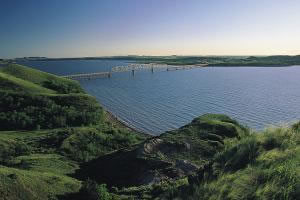 The geographic center of North America is in Pierce County, near Balta in North Dakota!

The largest companies with headquarters in
North Dakota