The population density of Ohio ranks ninth among all U.S. states. Nonetheless, Ohio currently suffers from a negative net population migration, and an increasing rate of unemployment. Ohio's unemployment rate currently stands at 8.8%, compared to a national rate of 7.6%. Eight U.S. presidents were from Ohio at the time of their elections, which is where the nickname "Mother of Presidents" originated. Seven presidents were born in Ohio, making it second to Virginia's eight, but Virginia-born William Henry Harrison lived most of his life in Ohio and is also buried there. Harrison conducted his political career while living on the family compound, founded by William's father-in-law, in North Bend. Ohio. The seven presidents born in Ohio were Ulysses S. Grant, Rutherford B. Harrison, James A. Garfield, Benjamin Harrison (grandson of William Henry Harrison), William McKinley, William Howard Taft and Warren G. Harding.

Language Marketplace has been providing professional Interpretation and Translation services in Ohio to a wide range of clients for many years.

We have English | Spanish | French language coordinators and conference interpreter services. Below is a list of towns and cities in Ohio that Language Marketplace presently has translation customers: 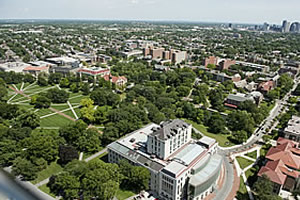 The first electric traffic lights were invented and installed in Cleveland in 1914!

The largest companies with headquarters in
Ohio