Oregon is a state in the Pacific Northwest region of the United States. Today, Oregon's landscape varies from rainforest in the Coast Range to barren desert in the southeast, which still meets the technical definition of a frontier. The Columbia and Snake rivers outline much of Oregon's northern and eastern boundaries respectively. Many indigenous tribes before the arrival of traders, explorers and settlers inhabited the area; the Oregon Territory was created in 1848, and Oregon became the 33rd state in 1859.

Oregon has a diverse landscape including a scenic Pacific Coastline, the volcanoes of a rugged and glaciated Cascade Mountain Range, dense evergreen forests, and high desert across much of the eastern portion of the state. The Douglas firs and redwoods along the rainy Western Oregon coast provide a dramatic contrast with the lower density and fire prone pine tree and juniper forests covering portions of the Eastern half of the state. The eastern portion of the state also includes dry scrublands, prairies, deserts, and meadows. Mount Hood is the highest point in the state at 11,200 feet. Crater Lake National Park is the only national park in Oregon. Oregon is the United States' leader in forest fires; in 2007 Oregon had over 1,000 forest fires.

Language Marketplace has been providing professional Interpretation and Translation services in Oregon to a wide range of clients for many years.

We have English | Spanish | French language coordinators and conference interpreter services. Below is a list of towns and cities in Oregon that Language Marketplace presently has customers: 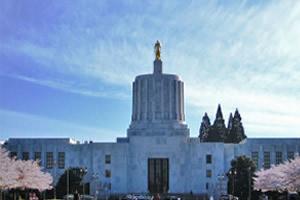 Oregon has the world's smallest park, totaling 452 inches, created in Portland on St. Patrick's Day for leprechauns and snail races!

The largest companies with headquarters in
Oregon